There’s nothing in life that little kids like more than big adventures. And moving house for the first time is a huge adventure (not just for the kids). But it can also lead to anxiety around the change, and fear of the unknown, so here is a compilation of some of the best advice for putting the kids first and making sure moving house is nothing but a positive experience for the youngsters: 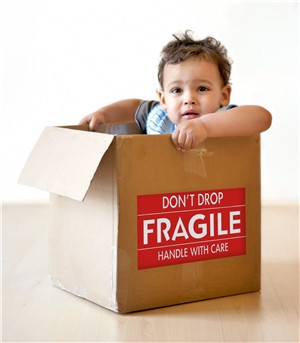 Remind them that it’s no big deal for them to make friends because they’re so awesome.
If you’re moving further than a few suburbs away, one of the biggest fears will be that they will have to change schools. And that means making new friends. If your child is a teenager, you might as well give up now, as their current gang of friends is the only important thing in their life and they will never be able to replace any of them or meet new ones. Oh and they will hate you forever, obviously. But the younger ones are easier to convince: remind them of how they first became friends with the other kids they know now, and highlight how easy it was. Reassure them that they’re a great kid, and that everyone will want to hang out with them in the playground from day one because they are funny/charming/generous/[insert your child’s talent here]. And it doesn’t hurt to convince them that they’ll soon have a whole new group of friends to play with in the neighbourhood who are much more fun than the current cardboard Kylie who lives across the road right now and won’t leave them alone…

Involve them in the process so that they feel invested.
Unless you’re moving overseas and buying a property site unseen, then you should try to involve your kids in the process as much as possible. Show them property brochures and websites that you’re researching, take them to viewings, and of course, consider their views when it comes to choosing your new home. After all, this is their childhood home you’re deciding on, and childhood memories tend to stick. This is also the perfect time to introduce them to Monopoly if they haven’t already played it, and start providing some valuable pre-adult financial education by dividing up the monopoly money and telling them that they will need to contribute to the purchase of the new home (there’s a life lesson in everything…).

Facilitate as many visits to the house as you can before moving in.
Let’s be honest, going to sleep in a different environment can be intimidating for all of us, especially when you’ve just left the only home you’ve ever lived in. It is the start of a new life. And that can evoke a kind of grief that comes with any change. So try to pre-empt this by taking the kids to view the property as many times as you can (without coming across like a crazy stalker to the incumbent residents). Let the children pick out a bedroom (but make sure you shotgun the master bedroom first, otherwise good luck wrangling the en-suite with the hot-tub out of the arms of your seven year old), and allow them to picture where all their toys will go, and where they will sleep. If they can get a feel for the place before moving in, it won’t feel so unfamiliar on the day you finally move house.

Encourage them to pack their own boxes.
This is a bit of a win-win scenario: they get to pack their own boxes and feel in control, and you get one less room to pack up. Jackpot. Well, it’s not quite that simple, as they’ll obviously need some help (especially the under three’s, as they will have a tendency to pack empty toilet roll tubes, the butter that was in the fridge door that they somehow got their hands on, and the old shower cap that’s been sitting on the side of the bath for six months). But if they are old enough to pack away their toys, books and clothes, then this is a great exercise to ensure they know all of their stuff is coming with them, and that it will be packed away safely when the removalists come to take the boxes.

Give them a Very Important Job on moving day.
Depending on their age, give them some partially critical responsibility on moving day (but not the teenagers, they will only mope around making the place look messy. Send them to the movies or something instead…). Why not print the kids off their own personal copy of the inventory of boxes and furniture, and once the removalists have taken everything into your new home, they can check the box numbers off against their list. Another win-win (you’re welcome).

Get the kids’ rooms unpacked first.
Don’t make the classic mistake of unpacking a ton of boxes in the kitchen and the lounge room, setting out all the furniture, making huge progress on unpacking your home contents, only to have the kids pass out at 6pm from moving day fatigue and have no beds to sleep on. As soon as everything is off the truck and in the house, make up the kids’ beds. That way, they can sneak off for a rest, and head to bed when they need to. And while you’re in the process, it’s probably a great idea to make up your own bed as well, as before you know it the moving day fatigue will hit you too and you’ll be right behind the kids.

The Moving Guys Will Make The Move Easy For You

GET A QUOTE ONLINE